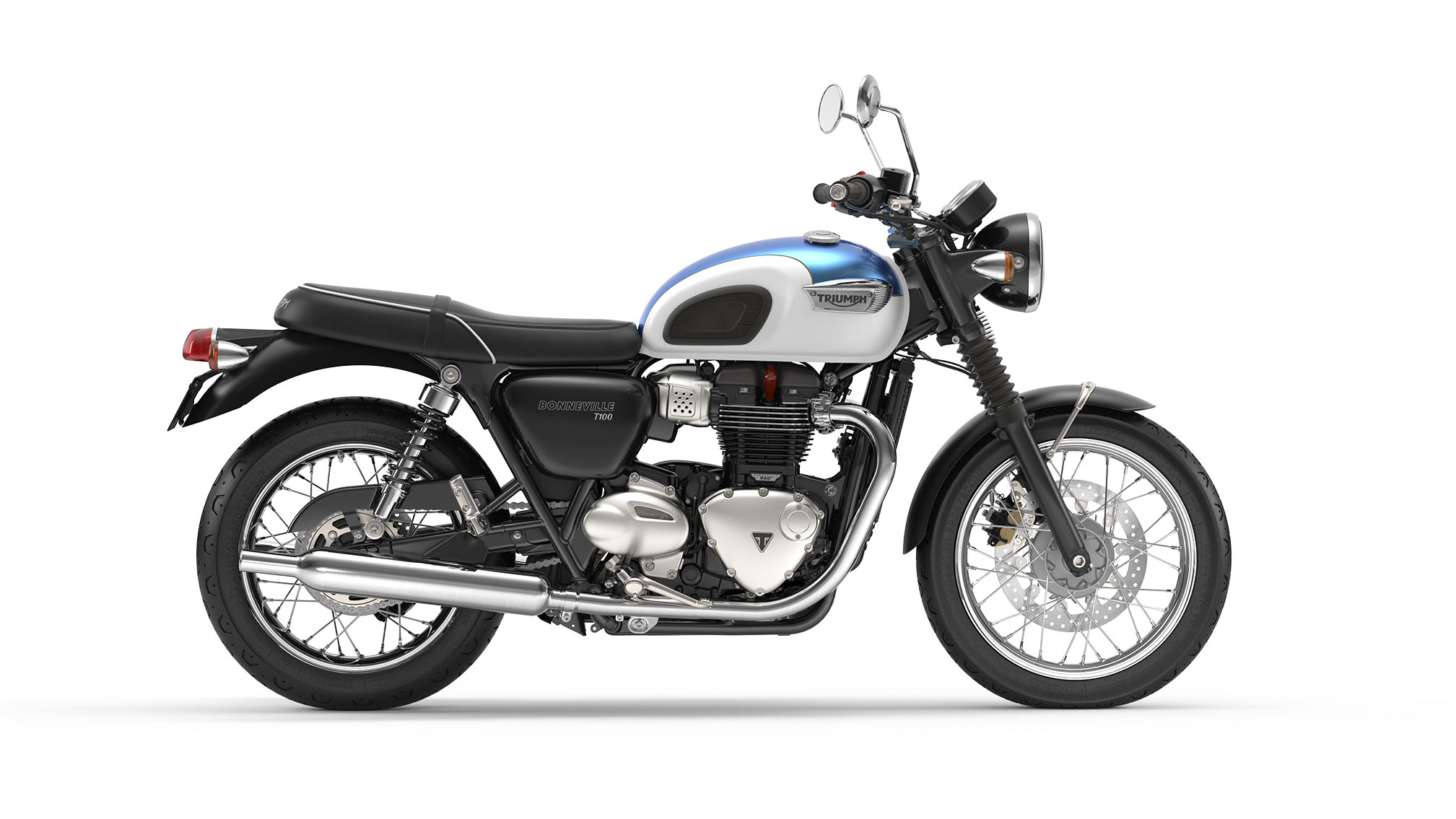 The Triumph Bonneville is a standard motorcycle featuring a parallel-twin four-stroke engine and manufactured in three generations over three separate production runs.

The third series, by Triumph Motorcycles in Hinckley, Leicestershire, began in 2001 and continues to the present as a completely new design that strongly resembles the original series.

The name Bonneville derives from the famous Bonneville Salt Flats, Utah, USA where Triumph and others attempted to break the motorcycle speed records.

Bloor's Triumph Motorcycles Ltd launched a completely new model, the Bonneville 800 (790cc), in September 2001. Originally built exclusively in Hinckley, England, some models are now (2014) produced at the company's Thailand manufacturing facility, which also makes components and accessories for various Triumph motorbikes. The new Bonneville strongly resembles the earlier models in style and basic configuration, but with modern engineering. At the debut the new version was given a 790 cc parallel-twin engine, with the up-spec T100 receiving an 865 cc engine from 2005. From 2007 on, all Bonnevilles received the 865 cc engine. Through 2007, all engines had carburettors; electronic fuel injection (EFI) was then introduced to the 2008 models in Britain and to United States models in the 2009 model year, in both cases to comply with increasingly stringent emissions requirements. Dummy carburettors, which are actually redesigned throttle bodies made to resemble carburettors, have been added to the 2009 models to retain the original vintage styling of previous years. For 2016, Triumph introduced an all new T120 1200cc 270° liquid-cooled, SOHC, version of the Bonneville, then in 2017 a T100 900cc version.

From 2008, all Bonnevilles received a slightly larger and reshaped tank to accommodate the EFI pump, but the tank capacity was not altered. Even though US 2008 models were not injected they still received the larger tank, therefore the space for the pump was not used.

All the bikes in Triumph's current "Modern Classics" line are derived from the new Bonneville, including the SE (with a smaller front wheel to be marketed to riders who may have found the 19' wheel too tall), T100, Thruxton, Scrambler, America, and Speedmaster.In 2006, Triumph launched the "Sixty-8" line of Bonneville accessories, offering vintage and modern-style items including seats, seat covers, cam covers, sprocket covers, petrol tank covers, tank badges, panniers, and other items to allow Bonneville owners the opportunity to customise their bikes for considerably less cost than traditional customisations. The adoption of the EFI engine in 2008 rendered many of these accessories obsolete, since tank covers, tank badges etc. would not fit the redesigned tank.

The original T120 Bonneville was a speed-orientated motorcycle, but the new Bonnevilles are softer and aimed at the roadster market. In particular, the 865cc Bonneville competes directly with the Harley-Davidson 883; and MotorCycle News declares that "Triumph Bonneville is unquestionably the better motorcycle. The handling is more than respectable, the brakes markedly better and, of course, it’s British."


To help you find the best parts for your Triumph Bonneville take a look below at a few suggestions chosen from our stock of road parts.